The head stock is inlayed and the fingerboard fretted

Cutting mother of pearl for the head stock 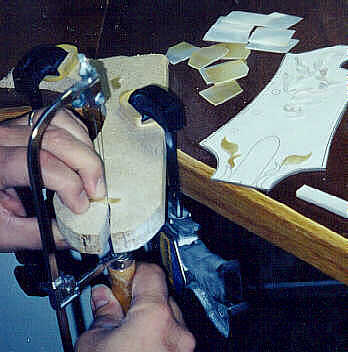 I ordered one ounce of white mother of pearl slabs and one ounce of gold. When I received the gold MOP I was surprised at how inconsistent and subtle the gold color was. The description says that at least one side should be fully gold, but only about half were. Anyway, I ended up simplifying my neck inlay design and had plenty of both colors.

It took me at least one full weekend to cut all the MOP pieces for the head stock design. I used a jeweler’s saw with very fine blades to rough cut the pieces, and an abrasive dremil attachment to sand them into their final shapes. I kept the pieces arranged on a plastic template until all were ready to inlay. 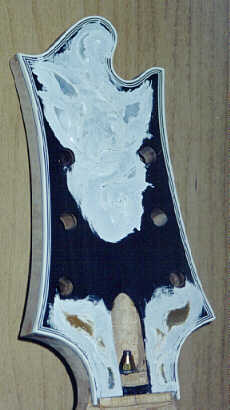 I took a second template with small holes drilled along  the pattern, and marked the location of pieces with a  white pencil. Then I used a weak glue to tack the  pieces firmly to the surface exactly where they were  needed to form the pattern. Then I painted over the pieces with white tempera paint (not too wet). When  the paint dried, I used an exact-o-knife to trace around  every piece. This left a crisp line that marked the area  to be routed.

I removed each piece and rearranged them on the template to keep them organized. Then I used a dremil with an attachment that acts as a depth guide. I used a small 1/16″ router bit. The depth was set so that a very thin amount of wood would need to be removed. I did
this because the gold MOP loses some of its color if you sand much of it away. Normally, you leave some MOP protruding from the wood. Sorry I did not get any photos of the routing step, but I think everyone knows roughly what that is like. I was surprised that the dremil did that job so easily. As I routed out the wood, I used a small carving tool to remove sharp corners. I tested each piece to make sure that it would fit easily into the recess I cut for it.

Gluing the pieces in with epoxy 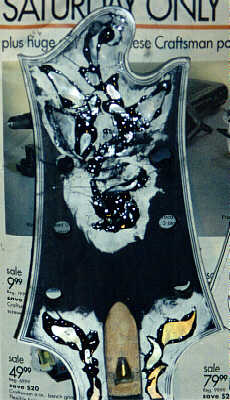 Next I mixed some black pigment with epoxy and glued the pieces in. This is a point at which I made some mistakes. The first time I did this, I over estimated the time it would take to lay the epoxy into each cavity and place the piece in it. So I filled everything above the truss rod groove with epoxy and found that I only had time to jam about four pieces in before the epoxy started to set. Silly mistake, so I cleaned out all the epoxy before it got beyond a thick rubbery hardness and started again. This time, I mixed less epoxy and tried only to place four to five pieces in at once.

Later on I had a problem occur with gluing the pieces into the finger board. Somehow, I was not careful to mix enough hardener into the epoxy. As a result after waiting overnight the epoxy was still soft and rubbery. So I  had to use an exact-o-knife to loosen and pry out
all the pieces and clean out all the cavities. The next time everything when just fine. It looks pretty ugly right after you glue things in. Your supposed to let all the ooze out epoxy stay until it is hardened. This way you get a nice smooth flat surface after sanding it off.

I was pleased with the result, once I had sanded it smooth. I used an orbital sander starting with 120 grid medium paper. once I had things close to level I switched to 230 grid fine sand paper. I ended with a sanding block and 360 grit paper. The contrast between the ebony and the MOP can be increased by using some ebony oil to darken the veneer. I will hold off on that until I am at the wood staining stage. 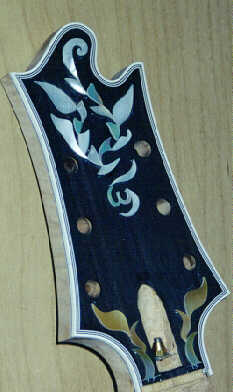 I was surprised at how tight some of the pieces seemed to fit. There is only a small amount of epoxy visible around most of the design. Wow, that part was fun. Because I will be using a MOP nut, I decided to use pieces of MOP at the bottom of the head stock that start off nearly white and transition to gold. I used some nearly white pieces of gold MOP in the upper part of the design the middle portion of the “W” and four others above that seem to have a green cast in this photo. These pieces  turn all different colors as the light source and angle change, while the others are more consistently white. I will have to get a better picture of this some day, because this one does not really do justice to it.

Tapering the finger board 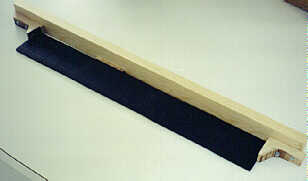 Before mounting the finger board to the neck it should be inlayed if desired. Before that I needed to taper its width. I ordered it pre-slotted and radiused. Otherwise, slotting would come before tapering. I made a tapering jig that would hold the piece very snug while a ran the jig along the table saw fence. The jig was reconfigured to give the same taper on the other side with the fingerboard turned around. A spacer is placed near the middle to prevent bending during the cut.

Gluing the finger board to the neck 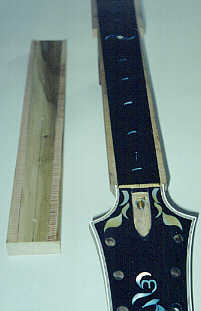 After inlaying the finger board it is ready to glue to the neck. I simplified the inlay design substantially, because the head stock design was busy enough. One simple idea I had looked great on paper, but when I cut out all the pieces and arranged them on the surface to check it out, it looked awful. So I simplified further, until I had just simple white strokes and a swirl at the 12th fret. When I glued the MOP I was careful not to leave some MOP above the wood surface every where, and limited ooze out. I sanded it nearly flat (matching the radius)  with a dremil abrasive bit mounted in my drill press with the depth stop set.

Binding the finger board 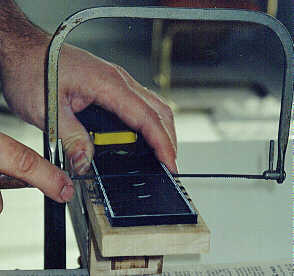 I used the same fine black white laminate in two layers that I used on the head stock. These two layers of laminate were glued on first, and are mitered at the bottom. Once the glue is dried these are slotted. This allows the fret tang to extend closer to the edge of the finger board when glued in place.

Next the outer layer of black and white laminate is glued to the top of the neck along the edge of the finger board. This continues the white black stripe along the side of the neck binding. Finally, the white binding is glued in place. I found that there was no need to rely on filament tape to hold the straight pieces of binding on. 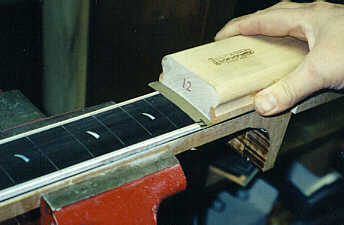 After the glue has hardened  the excess binding is scraped away from the top of the finger board. As the book says, the binding is part of the playing surface and the radius must be maintained all the way to the edge. I ordered an 8 inch long sanding block with a 12″ radius. I started with medium, then fine, and finished with 360 grit wet dry paper. The surface when smooth had a nice glassy sheen. I was careful to clean all glue and sawdust out of the slots for fretting.

Fretting the finger board 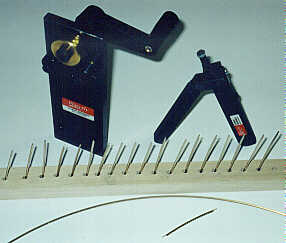 I ordered a fret bender and a fret tang nipper from Stew Macs. The fret wire is a medium gauge that I forgot the actual number of. I will have to go back and add that detail later. The bender is quite easy to use and does a great job. The nipper works well also, but a few times I had the wire in at a slight angle and it shaved or mashed the fret bead a little.  I lined up all the frets cut to extend beyond the edge of the finger board and with the length of the tang matching the length of each slot.
(The tang was a hair shorter than the slot)

They were glued in with a small amount of Tight Bond and hammered  in with a plastic headed fret hammer starting from the ends and working toward the middle of each fret. The result is shown below.

Well, it seems that this is taking a long time, but the neck is almost finished. I now need to cut the excess wood away and shape the radius on the back of the neck. Once that is done, I simply have to bind the back of the body and scrape it’s recurve. Then I am ready to glue the neck to the body and finish it. There are many steps to all that and beyond, so I expect to have at least a few more installments before I start shopping for a case.

As everyone can probably tell, I am taking my time doing this project. There are only so many spare hours in a day, and I really don’t want to rush into something in a way that ruins all the care I have taken so far.