My first experience building a guitar

Here is a description of my home guitar building project that I documented on the Internet back in 1998. I received a lot of email and comments at the time, and I eventually received one from Robert Benedetto himself. I decided to update the content here in hopes of helping out another beginning guitar builder.

When I initially started this project I was also taking guitar lessons, trying to learn jazz and blues. I thought it would be a great idea to try and build a hand carved archtop jazz guitar. Well, easier said than done. I can’t say that I ever mastered playing or making this instrument, but I do have the final result of this project to play what I can. It currently sits on a stand in my living room. So here is the story as it was originally told month by month back in 1998.

This is the goal. An instrument that resembles a Robert Benedetto Limelite guitar. See the book “Making an Archtop Guitar” by Robert Benedetto. Robert Benedetto is considered one of the best arch top builders in the world. Following in the tradition of incorporate cello/violin elements into archtops he is also known for some of his own innovations (e.g. ebony tailpiece with nylon strap to end pin jack). A lot of the steps in his book include instructions on how to tap tune the woods and instrument as it is made. The arch top on the left is a Benedetto (limelite model). It lists for $35,000.00. No way I could ever afford such an instrument, or do justice to it with my playing level. But his book shows how to make them. Notice how nicely everything is bound: body, neck, head stock, even the pick guard. I’m sure whatever I make will not be of this caliber, but anywhere even close would be fantastic for a first try. The cost should be under $800.00, including the non recurring cost of tools.  The image above is copyrighted by Robert Benedetto

I will track the progress month by month on this web page. I hope to be done with it by some time this summer or fall.

Here is what I did from mid January to mid February

The first step involves buying some tools (drill press, band saw, clamps, small plain, bending iron, etc.). I got a new Delta 12″ bench top drill press ($169.00), and a Delta bench top band saw ($159.00). In a later addition to this site, I mention some other tools that I have been using and find indispensable.

The mold, pictured below on the left, is made from 3 pieces of plywood glued and band sawed. The sides are trued up with a sanding drum on the drill press. It is finally coated with marine varnish. It is used to clamp wet bent sides into place until they dry, and until the kerfed liner is glued around the inside top and bottom. Bending the wet sides with a hot bending iron is tricky where the curvature is sharper by the cut out area. The ‘4A’ western flamed maple back and sides set for an arch top costs $142.00, so I would hate to break a side or two on this step. 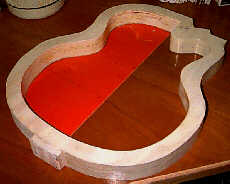 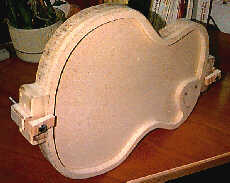 The cradle, shown on the right, is used to hold top and back plates while working them into an arched shape. It still needs some padded trim along the edges and the clamp jaws. It is made of particle board, and the clamps are made with scrap wood and thick lag screws with wing nuts.

The depth gauge, below, measures in 16ths of an inch and is made of bass wood and scrapes from the garage. Benedetto’s book showed how to make it. It is used to reach into the middle of a top or back plate and measure thickness. A new metal one from Stewart McDonnald’s catalog goes for $160.00.

I still have some details to decide on, like what bindings to order. What height/gauge fret wire I want. Here are some of the places I will order supplies from.

Exotic Woods Company These folks sell  high quality woods. From them, I plan on ordering the front (‘3A’ Sitka spruce), back and sides (‘4A’ western flamed maple), neck blank (‘3A’ hard curly  maple), pre slotted and pre radiused finger board (‘A’ ebony), peg head vaneers, and liner.